Spring has sprung and, like the urge to eat fresh salads, I just had to do something lighter than my normal “dark and interesting” aubergine and plum colours.  I bought a kilo of creamy white cotton chenille from ebay with the thought of being able to dye it but it’s so soft and velvety just as it is that I based the whole scarf around it.  There are only stripes of it but most all the others are the same neutrals with a few accent fancy yarns I spun specifically in small quantities.  After our Anne Artis spinning day I felt justified in loving to spin fine so this is mostly loosely woven “fine lace weight” shetland 2ply.  The colourful things were experiments with boucle and wraps, oh and a bit of shetland plied with some gold machine embroidery thread gave me a light glitter yarn.  The other fun thing was that I did it with the aid of my new variable dent heddle.  I chose the Kromski one instead of the Ashford as each dent is selectable rather than groups.  I love the flexibility of it and can see I’ll be using it lots in the future. 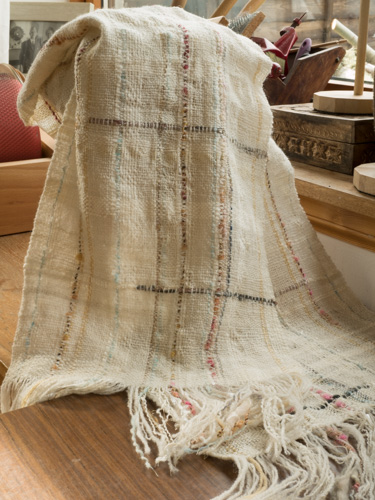