Ten eager weavers gathered at Strathpeffer for the HGWSD workshop with Dundee based weaver Cally Booker. Cally works from her studio in a converted jute mill and is passionate about hand weaving, colour and the exploration of multi layered weaves. She specialises in weaving beautiful home textiles, scarves and fabrics.

Several participants had brought along their looms already warped up with warps sent in advance by Cally. Others were able to use good quality table looms brought along by Cally , ready warped. This enabled the whole group to weave straightaway.

Cally started by showing us a selection of woven samples, also known as gamps ,which illustrated five different colour and mood groupings based on the Goethe*/ Albers* colour triangle.( lucid, serene, mighty, serious and melancholic) Our own warps were designed in one of the colour groups with either a white or black contrast within the warp dividing the colours.

Our first task was to create our own colour mood designs based on any of the colour triangle groups , using coloured paper, scissors,card and glue sticks. We were encouraged to play with the width, order and position of colour blocks . Cally suggested that we tried to express mood through colour using a starting point such as music or film titles rather than a visual image. We all found this exercise helpful and more flexible than directly yarn wrapping onto card. The vibrant results amazed us all. We found ourselves using colours ” outside our usual comfort zone” . 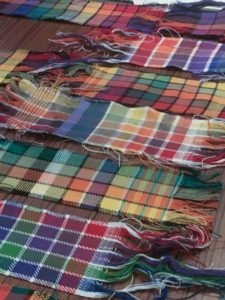 Everyone started to weave towards the end of the morning. The room became a hive of activity. Cally provided excellent handouts to guide the day and her confident enthusiastic manner encouraged all to try out the different colour sequences as the weft on our warps. Looms were set up for either basic plain weave ( tabby) ,which uses alternating paired shaft lifts, or balanced 2/2 twill, which uses a sequence of four different shaft lifts on the loom.

A number of different options for exploring shaded twill, other twill patterns or weave sequences were offered by Cally, which ensured suitable challenge for more experienced weavers in the group. Some weavers decided to try out each other’s loom and warp, but most of us chose to remain on the same loom to explore the possibilities outlined.

By the end of the day, lovely colourful gamps had been made and we had all learned more about colour and mood in weaving. Those using Cally’s looms were able to cut off their gamps to take home at the end of the workshop and the rest of us have sufficient warp left on our looms to continue experimenting.

We all agreed that the day had encouraged us to weave with colours which we might not have previously selected . We also noted the different effects made upon colours in weaving by the use of either black, white or grey yarns in warp or weft. It was a very well planned workshop and the day passed all too fast. Many thanks to Cally Booker for her excellent tutoring and to Catherine Freeland for arranging the event on behalf of the committee.